I’m going to be honest with you. After Emily made the mistake of a lifetime and sent Ryan the Perfect packing, I suffered an extended rage blackout. I’ve spent the last few weeks fumbling through life in a haze; I emerged from my Ryan-fueled walkabout to find every surface of my apartment decoupaged with Ryan images and artwork, and 3.5 Ryan-esque tattoos on various parts of my body (the .5 is a henna tat on my lower back saying “Car+Ry=<3 LOL”, which my dermatologist says will fade in the next 2-4 weeks). So needless to say, recapping a show without Ryan and his tank tops and scarves and perfectly sculpted facial hair was a daunting task. But I am a professional, and the recap must go on, though given my fragile state, weeks 7 & 8 are going to be slightly abbreviated. Please, call me a hero.

On this episode, Emily has taken the final 6 dudes to Prague. There will be three one-on-ones, and one group date.

It seems like the show has really just stopped trying when it comes to dates. They knocked out the metaphorical “love is a leap of faith” risk-taking dates early, so now it’s all about walking around various town squares and paying tribute to made up local traditions that have something to do with love. In this case, it’s rubbing a statue. Sure. As Arie is furiously stroking the “loyalty dog,” Emily interviews that she knows something about him that he thinks is a secret.

The bullshit secret that is so unimportant that I’m actually offended, is that one time like 10 years ago Arie dated a producer of the show for I don’t know… a minute? Emily chats with the producer in question, who tries to be an adult and explain that she hardly knows Arie anymore, since they haven’t even seen each other in years. Emily does not understand this, and keeps repeating “this isn’t a production thing, it’s a real life thing,” as if this is not the lamest excuse for a scandal in Bach history.

We come back from break and Harrison is standing outside of the Bachelor mansion telling us that Arie, Emily and Cassie all sat down and talked, but it happened off camera, and everyone decided it was not a big deal. ARE YOU KIDDING ME?! Why did we even spend the last ten minutes talking about it? This sort of thing would never be permitted if Ryan was still around.

So we’re back on the date as Emily and Arie sit down to dinner and reward each other for being able to “talk about stuff.” Then Arie tells Emily that he loves her and I have to leave the room so that I can hug my Ryan body pillow and feel better about life. 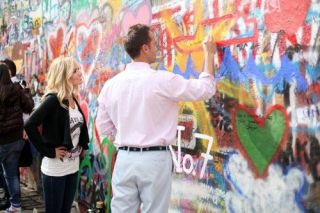 This is the first one-on-one date the Wolf is having with Emily, so we already know that he is going home tonight. They arrive at the John Lennon wall, which Emily does a pretty terrible job of explaining because reading cue cards is hard.

For the local tradition portion of their date, they visit a fence where people write their initials (I think?) on a lock and then hook it on the fence, and that symbolizes… something. Emily and the Wolf are unable to close the lock on the first time, which Emily thinks is indicative of John’s hesitance to open up, and which I think is indicative of how these two idiots don’t know that you have to remove the key before you can secure a padlock.

At dinner, in a last ditch effort to be vulnerable, the Wolf narrates in painstaking detail the time his GF cheated on him. Emily deems him wounded enough for a mack sesh, and Wolf says he’s a closer. Nope.

A couple of things happened before this date: first, Chris was a huge baby about not getting a one on one date, and second, Sean decided he needed to see Emily and accomplished that by literally wandering around the streets of Prague and yelling her name. Seriously.

This is Sean’s “I’m not worried about it” face.

For the date, Emily takes the dudes to a castle. Chris is a really bad sport, Doug is super awkward, and Sean is cocky as fuck because he made out with Emily all over the streets of Prague last night and knows he’s going to be fine.

Doug and Emily chat, and he’s being super awkward and acting like he doesn’t want to be near her. After some idle chatter, she takes him outside and gives him a speech about how she doesn’t feel like he’s been fighting for her. Doug is so sweet and sad and tries to kiss her to convince her that he’s into it. “Thank you for that,” she says before sending him home anyway. He feels dumb for kissing her, I feel sad for watching it. Bye, Doug!

The rest of the date is boring. Chris basically yells at Emily for not giving him a one-on-one, and Sean makes out with her a lot. In the end, Sean gets the rose because he didn’t act like a passive aggressive teenager.

After some more walking around aimlessly, Emily and Jef wander into a marionette shop. There is some talk about how Jef is ready to be a father because he is like a kid himself, and I’m going to go out on a limb and say that that’s some faulty logic. They pick out marionettes to represent each of them (and one for Ricki, because Jef knows how to get in Emily’s pants), and head over to a beautiful library. Rather than reading, though, they’re going to put on a puppet show detailing their relationship so far. Makes perfect sense!

After the worst puppet show ever, Emily and Jef roll around on the floor and talk about the hometown dates and their potential future. It’s all pretty boring until Jef says “I want to date you so hard and marry the fuck out of you,” to both Emily and my approval.

The first two roses are obviously going to Jef and Arie. Emily picks up the final rose, and before she can offer it out, Chris needs a moment with her. He apologizes for being a man child, and Emily is happy that he can admit he was wrong. They return and after lots of frowning from Emily, the rose goes to Chris. Poor Wolf is shocked and sad, and even though he is a grown man who is ok with people calling him “Wolf,” he does seem like a mostly normal dude. Sorry buddy!

The hometown episodes are always kind of boring to me, because typically we see the same general premise played out four times. As such, I’m not going to spend too much time on these. Here’s a quick rundown.

Mom and Dad are easily impressed as they welcome Emily to their home. Dad has a thick polish accent and doesn’t want his son to have a broken heart. Mom gets emotional as she tells Chris she loves him. Sister is the obligatory “tough one,” and asks one or two hard hitting questions before deciding that she’s going to blindly jump on board with this sham operation. Chris tells Emily he loves her before taking her to a surprise polish song and dance-fest.

Jef’s family has a ridiculously beautiful ranch in St. George Utah. Emily is stoked to see that he’s a little bit country, which he proves by driving an ATV and shooting guns. Jef has a million siblings, but no parents for the day since they are doing “charity work” in South Carolina. Jef’s three sisters sit with Emily and are immediately convinced of her charms when she picks up one of the many random children that are milling around the ranch. Brother Steve is surprised that Jef all of the sudden wants to be a husband and a dad. Emily and Jef sneak away and he reads her a note he wrote detailing all the things he loves about her. She looks like she gets a little misty as she tells him it’s the sweetest thing anyone has ever said to her.

Emily greets him at a racetrack, where he drives around while Emily coos how hot he looks before he picks her up and zips her around the track a few times. Arie’s parents are Dutch, and his mom awesomely and rudely starts speaking to him in their native tongue right in front of Emily. Mom pulls her aside and asks why she and Brad broke up, but they are able to get back on track when they bring racing back into it. Arie wants to propose, Dad is like “sure, buddy.”

Sean meets Emily in a park, and she grills him on how many women have met his family before. Whatever he says is enough for her to make out with him for a while. At the family house, Emily has dinner with Sean’s beautiful family as he says that he still lives at home. His parents both look like they are about to burst, so it’s pretty clear to everyone but Emily this is a joke. He shows her his room, which is decorated with stuffed animals and cookies, and she does STILL not understand it’s a joke, so much so that by the time finally he explains it, it’s mostly just awkward for everyone involved. Mom and Dad both love Emily and hope that they get married and make beautiful blonde babies. Sean and Emily make out on the driveway, and because Sean loves chasing and yelling at her, he follows the car halfway down the block for one more kiss before she bounces.

Of course the first roses go to Arie and Jef, because it’s been clear for a while that these are going to be the final two. After a moment, Sean gets the final rose. Chris immediately reverts back to his Prague anger, and scowls through Emily’s farewell before interviewing in a huff that he’s ten times the man of any of the remaining dudes. Whatever, Chris – see you on Bachelor Pad!

Thank you everyone for sticking with me during this trying time. Sarah and I will be back shortly with the Final 3 recap.

This entry was posted in Uncategorized. Bookmark the permalink.